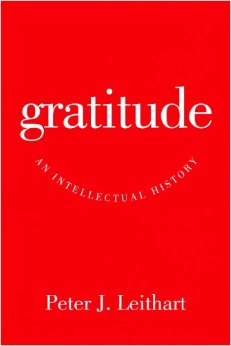 Gratitude is often understood as etiquette rather than ethics, an emotion rather than politics.

It was not always so. From Seneca to Shakespeare, gratitude was a public virtue. The circle of benefaction and return of service worked to make society strong. But at the beginning of the modern era, European thinkers began to imagine a political economy freed from the burdens of gratitude. Though this rethinking was part of a larger process of secularization, it was also a distorted byproduct of an impulse ultimately rooted in the teachings of Jesus and the apostle Paul. Christians believed that God stood at the center of the circle of gratitude. God was the object of thanksgiving and God gave graciously. Thus, Christians taught that grace cancelled the oppressive debts of a purely political gratitude. Gratitude: An Intellectual History examines changing conceptions of gratitude from Homer to the present. In so doing, Peter J. Leithart highlights the profound cultural impact of early Christian “ingratitude,” the release of humankind from the bonds of social and political reciprocity by a benevolent God who gave—and who continues to give—graciously.