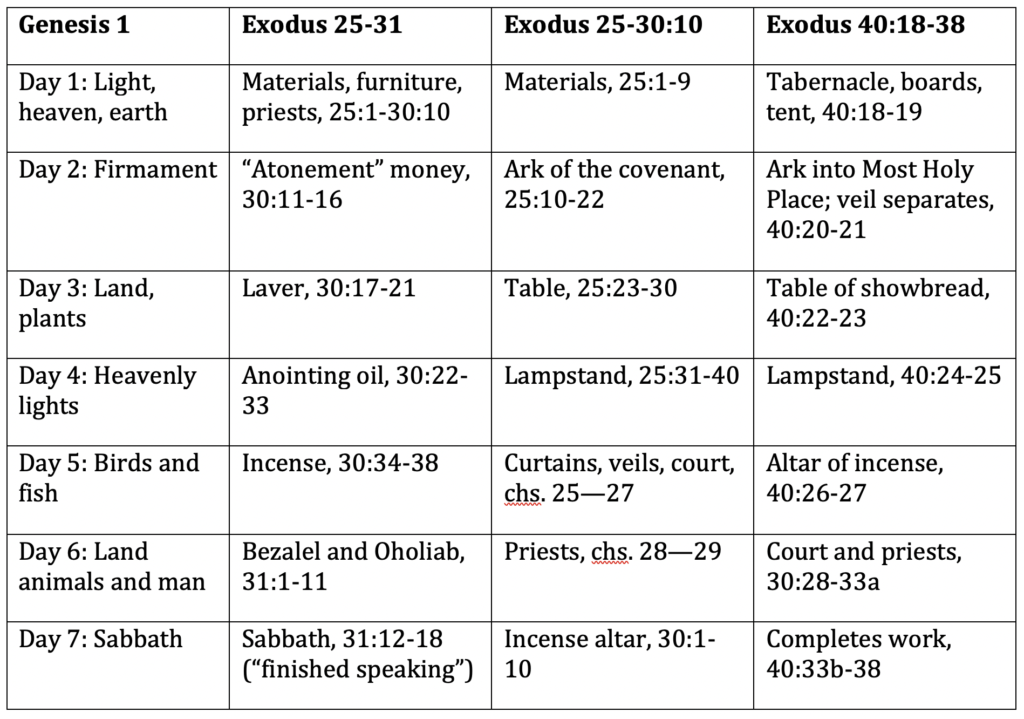 Not all of the connections are self-evident, but there are enough fairly obvious connections to make it plausible. Two of the texts in the Day 4 line are explicitly about the lampstand, a symbolic representation of the heavenly lights. The anointing oil (30:22-33) fits too, since by anointing the priest is elevated to be a heavenly light, lit as a lamp to guide Israel. Each of the sections of Day 6 focuses on man in some capacity – the craftsmen endowed with the Spirit to shape the tabernacle furniture or the priests who serve in the tent.

These parallels suggest there are less obvious parallels in the other sections. Two of the three Day 5 sections have to do with incense, and provides a visual link with the swarming souls of the sea and sky, fish and birds. The curtains and veils described in chs. 25-27 are billowy, cloudlike, again visually analogous to the creatures of Day 5. Both Exodus 31 and 40 end on a Sabbatical note, with a description of something being “finished.” The incense altar is an outlier, but the parallel indicates some Sabbatical dimension to the incense altar.

We can expand on this with a deeper glimpse of the link between Day 3 and the table of showbread. Dry land is a table spread with food for God’s creatures, a magical table that reproduces food, recycles waste food and turns it into more food to re-fill the table. Altars are also tables, and so the dry land-as-table suggests that the land emerges from the sea to be God’s table.

The Day 3 associations suggest something about Israel. Israel is a chosen people, not, as Robert Jenson has pointed out, woven into the nature of reality. Yet, the association of the twelve loaves with the grain that sprouts on the third day is an important qualification. Israel is chosen well after creation, but once Israel comes, she is the “first sheaf” nation, the first sprouts from the Adamic earth, the first food for the world. She becomes part of the “natural” fabric of creation.

In Exodus 40:22, the text explicitly says that the table is set “outside the veil.” No other piece of furniture is described this way. The ark-throne is behind the veil, inaccessible even to priests. But the table is “outside the veil.” Israel is not positioned on Yahweh’s throne, not yet. But in the loaves she is positioned in the Lord’s house. She can’t yet sit on Yahweh’s throne, but already she has a place at His table.